Written from a train between Barcelona and Seville

It’s Monday 10 Oct 2016. A little over a day after I completed my second obstacle course race. Another Spartan Race Super.

I was dreaming of a top 10 finish, but expected top 50, improving on my 102nd place finish in my first race.

After that first race in May, I took some time off and started planning training for this event. I found coach Sage Canaday on YouTube, love his videos and learned a lot about training to run.

One thing in particular appealed to me. High volume easy miles to get faster.

Truth is, I don’t like high intensity stuff. I can do 80% or 90%, but 100%, where I feel sick, and kind of like I’m going to die, where it feels like I’ve pushed my heart and lungs beyond the point of where they can recover. That’s really not for me. Those workouts are so painful that I often skip or postpone them I realised.

Higher volume running, at an easy pace sounded beautiful. So I based most of my training on that and worked up to about 50km of running a week. Almost exclusively hill running.

The first race didn’t really test me strength wise. I realised squatting more, deadlifting more, doing more pull-ups was not going to help me improve. I haven’t been in the gym since about June. Apart from running on a threadmill there (which I hate doing) when it was 40+ degrees outside.

I left all strength training to gymnastics. Using the Foundation course from GymnasticBodies.

For obstacle training, I picked up a 25kg sandbag from the hardware store and put it in a couple of pillow cases. Voila, homemade sandbag.

And I practiced power hiking. Walking up steep hills fast with my hands on knees. My calves let me down walking steep hills in the first race.

So almost all of my training was running, and weighted carries with the sandbag. I did still do intervals, and went hard, but compromised with 90% efforts and longer sessions. Using a sandbag hill sprint workout I picked up from The Natural Running Network podcast, which I think really helped. You’ll see why in my race breakdown.

08:45 Sunday morning. I hop over the wall to the starting line and take my place in the second row (feeling undeserving of taking up a place in the first row). 10 minutes to go. 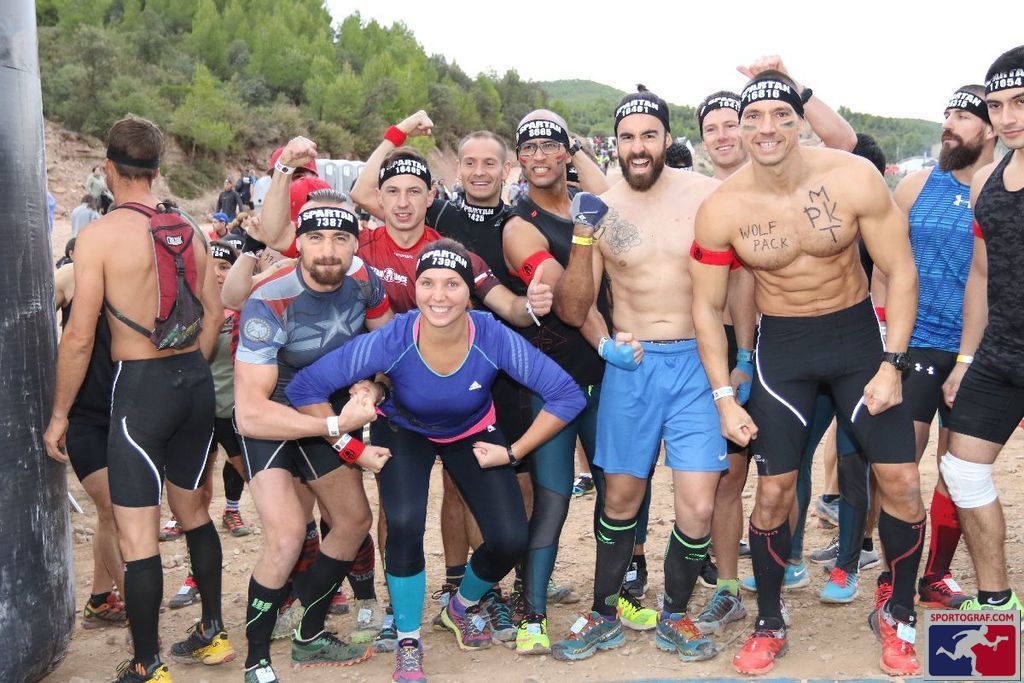 I try to take it all in. I’m excited. I breath deeply trying to calm myself. Spartan races are stacked with ripped men and women who literally look like the cast of 300. It’s intimidating, and with no qualification necessary to run in the elite heat, I doubt (as in the first race) whether I should be here at all.

The plan is to attempt to stick with the fist 20 or so racers (the reality, I’m thinking, is that I’ll fall off and plod along at whatever pace I’m capable of).

30 seconds left. I start my Garmin early so I can focus on setting off. Boom, it’s on! Sprinting through clouds of yellow smoke from a flare thrown just in front of the starting line.

The beginning of Super distance Spartan Races are always fast. The key is to get through the first obstacles first so a queue doesn’t build up where you end up waiting behind people. After that I could settle into a sustainable work rate. 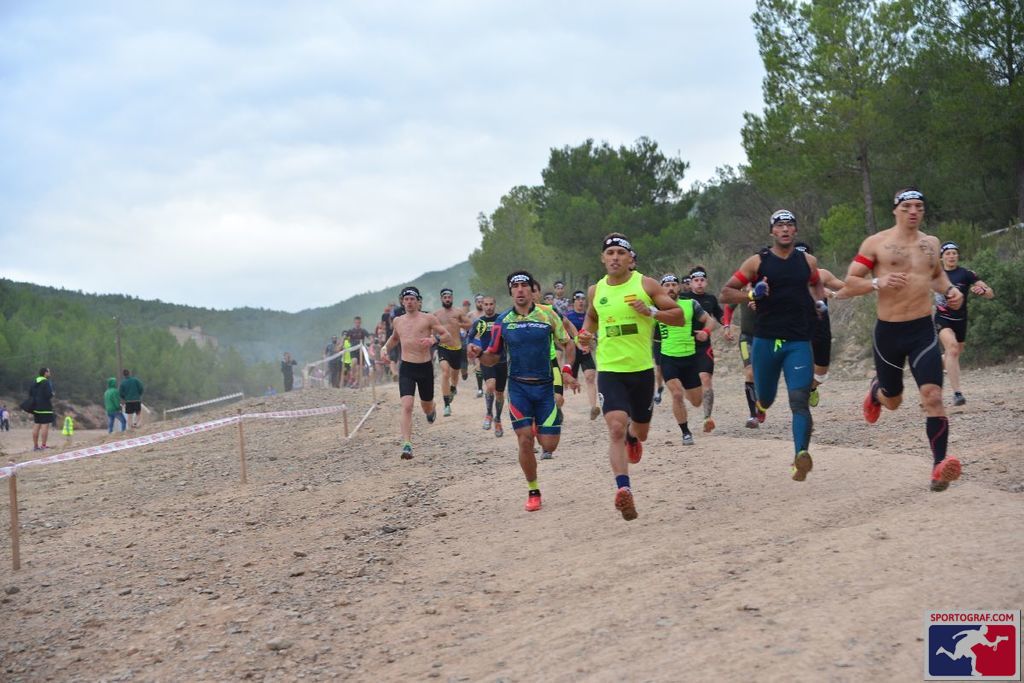 I stayed in the first 20, cleared the first wall, and ended up behind the leader. Too fast. I slowed the pace a little. A few more passed me. Ok, here’s my spot.

In the top 15, I found I could still keep pace comfortably with these guys. In my first race I had a hard reality check. People zipped by me after about 500m and I had no hope of catching them.

Now we hit the first weighted carry, sandbag. I was kind of happy to see it so early because of training with a sandbag so much. Familiar, and very interested to see how I’d match up again others.

I grab the bag and started jogging. I catch up to next guy in front quickly. He was walking. I check in. Legs, good. Heart rate, slowing. I can push.

I wait for an opportunity, pass him, and start running with the sandbag again. The downhill starts, big rocks and drops ahead. I pass another few on the descent, hopping from rock to rock fairly comfortably, dump the sandbag at the end and take off running.

This was a massive confidence boost. I was keeping running pace with the next few guys in front, the effort still felt sustainable, and I felt powerful with that sandbag. Bring on more weighted carries!

The pair of guys in front of me eventually opened a lead and I lose sight of them. No sound of anyone behind though. I told myself not to look. Forward!

Later in the race came the log carry. I was able to run the circuit again, apart from wading through the muddy pool at the beginning. Going through the water was noisy, so I would be able to hear people behind me. Nothing yet. I finished the loop, and put the log back in the pile as the next couple of racers came behind me, just starting the carry. Solid! A little space between me the next guys, and I could see the next two in front of me again.

It was a little surreal. Was I in the top 10? Are some of the top racers going to crush me any minute. Maybe they got stuck at a queue at some obstacle. Was I working at a sustainable rate? Would I do well for half the race only to crash and burn at the end?

I put aside the self doubt as much as possible and focused on the guys ahead of me. It was fun to catch up. I’ve never caught up with anyone in any of the few races I’ve done before. History says, they pass me, and I never see them again. The bucket carry next. Fill up a bucket with small stones and complete the circuit. A downhill start, I ran at a fairly good pace. When we hit the uphill I caught the next two guys. Right behind them walking uphill. I felt good, but no room to pass. I enjoyed about 30 seconds of what was sort of a small rest walking the bucket uphill where I felt I could run.

A longer running section, and I lost sight of them. Then caught up again at the tire carry. Weighted carries proving by far my strongest area in the race.

The slackline next, and the runner ahead falls and does burpees. I make it and gain a place.

Nearing the end, I’m neck and neck with another runner who caught up to me. We’ve been with each other for about 2km. I open up a little distance on the downhills and get ready for the rig (think monkey bars, and gymnastic rings). My favourite obstacle and one I find super easy, even with wet muddy hands. I dry my hands on the straw bales, straight arm swing to the end, hit the bell and get ready to run. 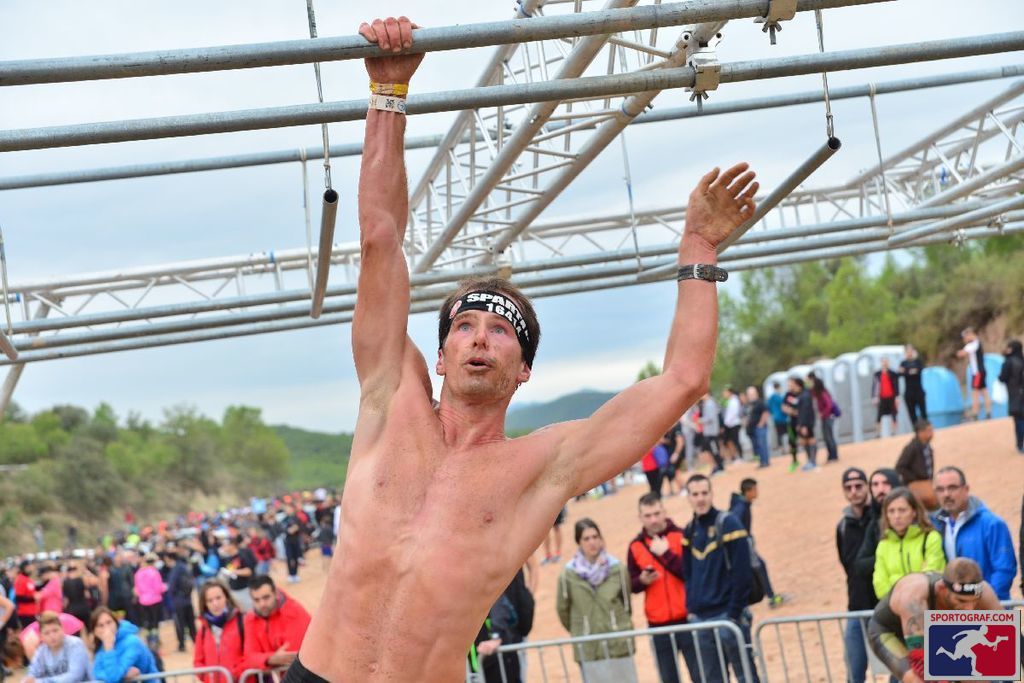 I stop and look at the guy in disbelief. “Trente burpees!” he adds. I look at the bell, it’s swinging back and forward. I point to it. All the other bells are stationary. I’m the only one on this obstacle.

In fairness, I don’t think I rang it, I should have smacked it hard, but more grazed it. Stupid stupid stupid. I fail my easiest obstacle. Thirty burpees take me about 2 mins, even tired. I’ve trained this. Deal with it and keep moving. The guy I was running with overtakes, but no one else behind. Lucky. 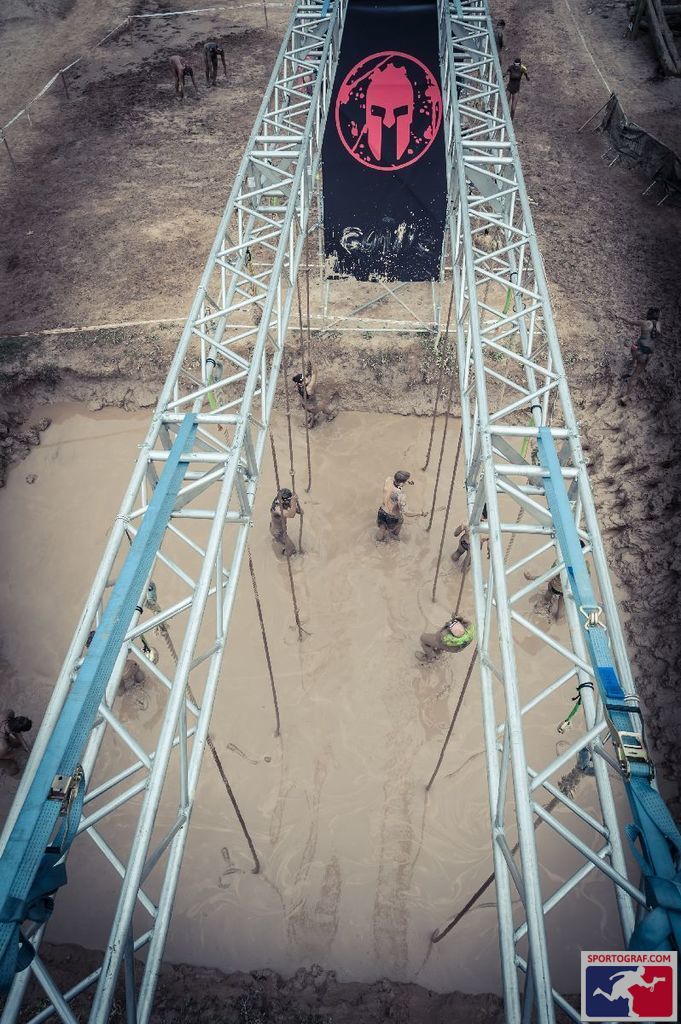 The final gauntlet. Weighted pulley, done. Rope climb, from water with a fairly muddy rope. I clear it, but lose my foot hook on the way down and crash into the water. I guess I made up 2 seconds there. I pull my self out of the muddy water and press on.

The sled pull is harder than expected. Done. Spear throw, seems short, easier than before. Miss! Son of a… A runner ahead of me finishes his burpees, I start mine. I think someone arrives as I finish my 30, but I don’t look back and don’t see anyone after that.

The announcer speaks, “Y aquí viene Paddy O Anlon”. ‘That’s cool’ I thought. They must be mentioning peoples names at this race. 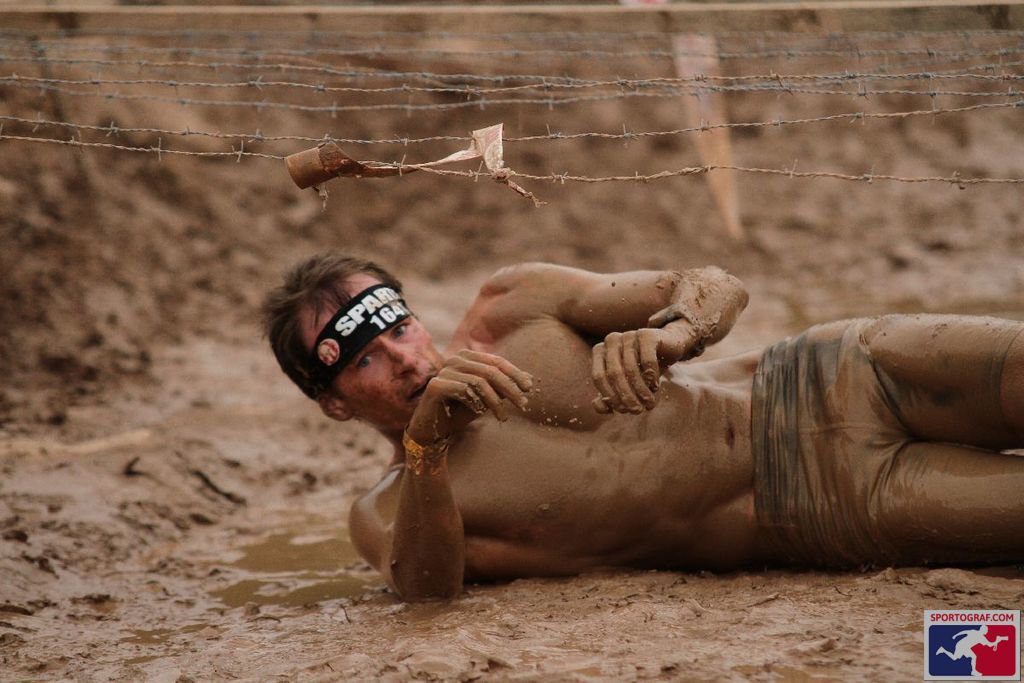 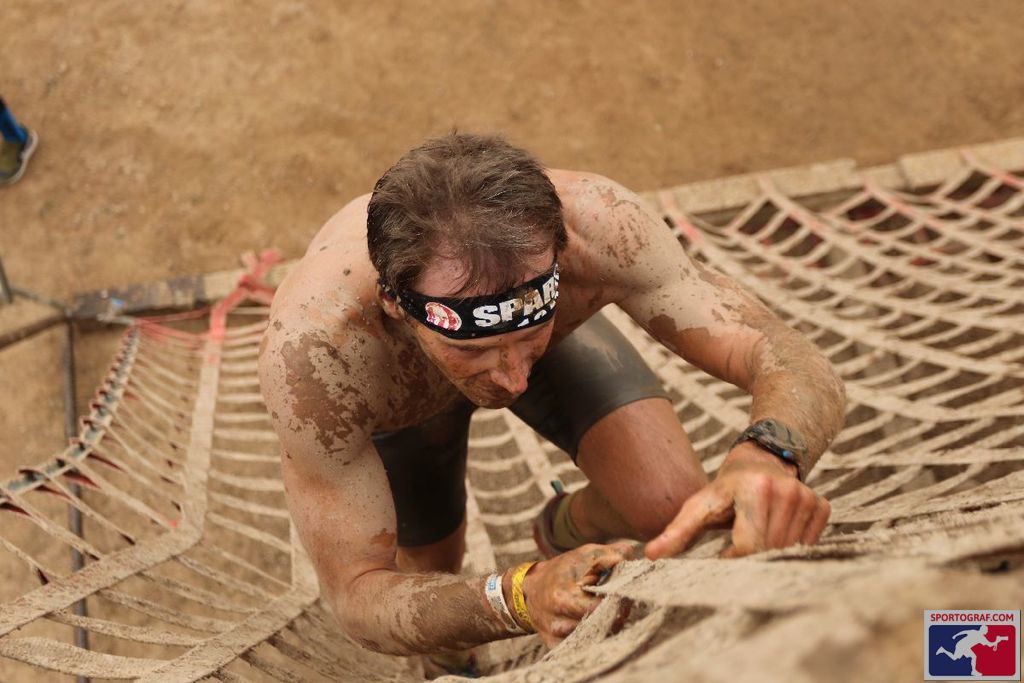 I pass mud pools and barbed wire, climb the cargo net structure, much faster than before. Better technique. I flip over the edge on the way down and some how slide to the bottom, gaining a few seconds. I climb the slopped wall, which has a rope to get up, and water pouring down it (not sure what that one’s called). A volunteer shouts at me ‘Top 10, top 10’. An exciting thought, but I don’t really believe it. Still I glance behind, no one there. I jump the fire, cross the finish line and fold onto the ground, wrecked and deeply satisfied with my effort regardless of where I placed. 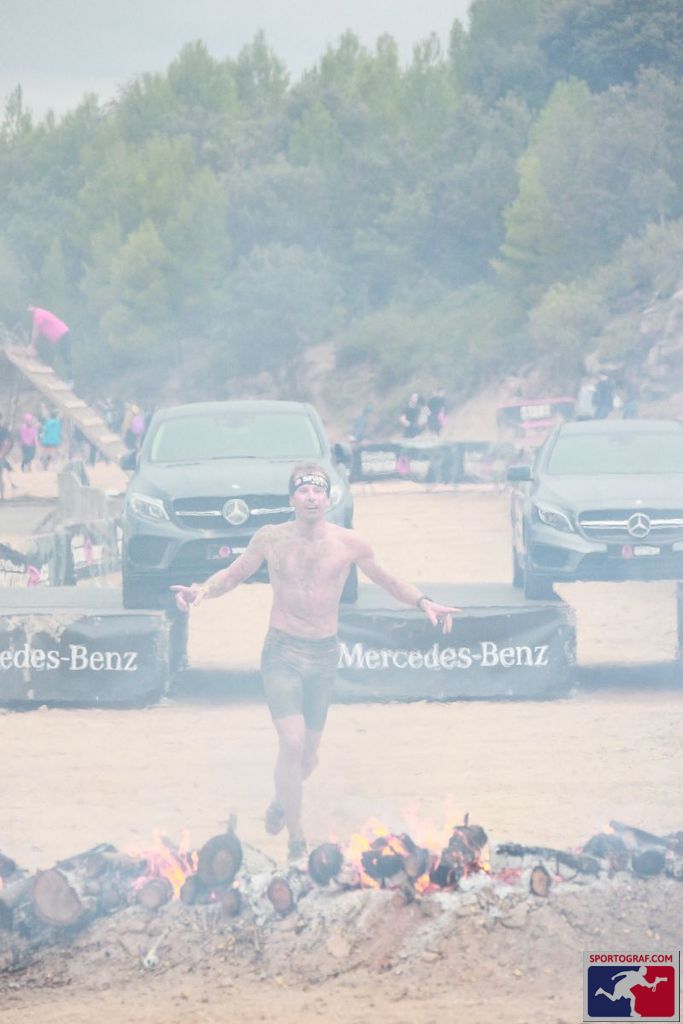 Apart from a painful stomach cramp that lasted for about 2 minutes and meant a shorter stride and slower pace (and apart from that silly rig mistake and missed spear throw), I feel I went out as hard as I could have and navigated the course well.

Despite loving the event overall, there were moments of wishing it was over. When my heart rate gets super high, my mind wants to stop, slow down, take it easy for the rest of the event. But I kept pushing for the most part, slowly my heart rate drops on the downhills. Confidence comes back, technique improves. And then the next hill crushes me. Those are the moments that make the experience. Trusting in my preparation, knowing I’ll recover. Trusting the pain and discomfort is subsiding. The lows and highs of a Spartan Race.

Fatigue makes cowards of us all. — Vince Lombardi