This time last year I had just finished my first marathon ultra trail race. After over 14 hours of running in the cold, wet and fog shrouded mountains of the Sierra de Grazalema, I told myself I would never repeat the experience.

A year later, I sit here typing at home, in Prado del Rey, looking out the window at those same mountains, with contentment and a little pride, having finished my second ultra.

The ‘Queen’ race is the 166km distance, with 6,600m of positive elevation. It starts in Prado del Rey, Andalusia, Spain, and continues all the way to Ronda before looping back to the same starting point.

The shorter distance, the Bandolerita, is 87km in length with 3,800m uphill, and the same downhill. It also starts in Prado del Rey and follows the same route as the Bandolero before looping back at Villaluenga del Rosario, passing through the most stunning parts of the National Park, Sierra de Grazalema.

On 3 March 2018, I attempted the Bandolerita for a second time.

The whole week leading up to the event it poured rain, which meant another year of wet and ridiculously muddy conditions. A big positive was that it wasn’t as cold as in 2017.

The Bandolerita course was modified to 81km for participant’s safety, cutting out some very steep and slippy sections. The Bandolero course suffer a big last minute modification, being cut to only 117km, because of overflowing rivers. Eventually, early morning Sunday, the race would be cut short for all runners who had not yet passed the river at El Bosque, which also overflowed.

The organisation, Club Tritón, definitely had challenging decisions to make. I can say for my experience, I felt our safety was put first, and a shortened course is infinitely better than cancelation. I think I can speak for almost all ultra runners when I say that we would prefer to try to race in almost any weather conditions than not race at all.

I felt completely prepared come race day. I learned an incredible amount from last year’s race and made many adjustments to my training which I’ll share in a separate post.

We set out at 11am without any rain. I actually got too warm and removed my hat, gloves and wind breaker after around the first 10km.

I could feel the adrenaline flowing. It numbed my senses some and made it more difficult to read my body. Was I going out too fast? I focused my my breathing and tried to settle into to a rhythm.

I ran all hills from Prado del Rey to El Bosque, something I couldn’t have imagined doing in 2017.

Like most, I skipped the first aid station in El Bosque, planning to have my first pit stop in Llanos del Campo. Someone shouted as I passed “16th place!”. I didn’t necessarily want to know just yet, being only one hour in. I worried again I was going too quickly.

I’m incredibly grateful to all the volunteers who were out there for hours on end, through the cold and wet night, helping us. Without them there is no race. Thank you!

I hit the first steep hills climbing out of El Bosque and felt my legs aching. They felt tired. I had planned my training taper well and should have been in near perfect form this day, but for whatever reason, my legs felt tired. I had experienced this on some training runs. I’d slept well, and felt I’d recovered well from my last training session, but for a seemingly mysterious reason, things were harder on some days.

At least I’d seen from training that I could still move well on these days, but it meant a little suffering. I accepted my condition and pushed on.

I arrived at my first aid station stop, Llanos del Campo, one or two minutes ahead of my fasted predicted time, 2 hours 19 minutes. That was a good sign, although I was not enjoying myself much. It still was still hard work and I prayed my legs would recover.

I was so lucky to have my family visiting from Ireland to support me. My wife, mom, sister and little niece were all at the first pit stop waiting for me. It was so good to see them.

They had my supplies ready to go. We swapped empty bottles with full ones and in under two minutes I set off again. I skipped the next aid station at Puerto del Boyar and pressed on towards Villaluenga.

The first half of the race proved the most challenging. I reminded myself that I could just stop at the next aid station. I didn’t have to do this. I thought about how silly and ridiculous racing is. The first mental challenge of the day. Now my adductors felt like they were going to cramp. I’d never felt that before. What was going on with my legs…

I reached Villaluenga thirsty and hungry. My gel bottle had some how opened and emptied itself in my back pack, leaving a sticky mess. I drank a lot on that section and realised it would have been a good idea to have refilled at the aid station I skipped.

At the Villaluenga aid station my crew were ready and waiting again. I set a lap on my watched and decided to take a 10 min break. I had a Clif Bar, banana, and about 500ml of water in an attempt to re-hydrate and re-fuel. Stocked up again with water and gels I set off from the aid station towards Grazalema.

A little while after leaving the aid station I realised my legs felt pretty good. I reached La Charca Verde and felt better than I had all day. Moving quickly, energy in my legs. I was finally in a groove and enjoying myself.

Another five minute pit stop in Grazalema, still feeling great. I dreamed of continuing to feel this good until the finish line, but prepared myself for another low.

That low never came though. I put on my headlight as night fell close to Benamahoma. The river Majaceite was high and flowed violently, with water lapping onto the trail at points. This is where the same river would later overflow causing the race to be called off. It was beautiful in a way and the time passed quickly.

At El Bosque I took my fourth and last aid station stop. Only a flat and very runnable 11km from the finish line, my plan was to gather energy and finish strong. There, two friends Cátia and Emilio were also waiting with my family. The support warmed my heart and they chased me out the door and down the street as I wrapped up my three minute stop and set off for the finish line.

Last year, my biggest mistake was going too hard with around 20km to go. I had felt amazing and thought I could push the pace. Shortly after I crashed and burned. My legs seized up and I painfully walked in the last 10km. This year I would stay consistent, efficient and patient. I ran almost every metre of the last section. Reaching Prado del Rey, local friend Alberto was waiting and ran with me up the last hill and down to the finish line.

I jumped in triumph as I crossed the line. I did it. Joy washed over me. Mission accomplished.

I had run for 10 hours 37 minutes and 12 seconds. Coming in 13th place overall out of close to 400, and being the first local runner. A category I’m very grateful and appreciative of being considered in, being a ‘guiri’ living in Prado del Rey. I took over 3 hours off my time in 2017, although the course was 6km shorter. I had obsessed over training and preparation to cross that line for almost five months.

I’ve felt welcome and at home in Prado del Rey since moving here almost four years ago. The people are pretty amazing, and both kind and generous. I remember randomly being stopped in the street on several occasions soon after arriving, asking if I wanted to stop and have a tea or coffee. Neighbours have shared contacts and said to get in touch if I need anything more than once. I feel blessed to call such a beautiful place my home.

I wouldn’t have made it to the end without my ‘race crew’. They followed my around all day in the rain, supporting and encouraging me along the way. Thank you all so much!

My biggest lesson learned was to stay warm immediately after the race. I came in 25 minutes before my fastest expected finishing time and my family hadn’t yet arrived. Feeling good, I walked around, stretched and talked with people I knew. Too late, I realised I was getting cold, and probably my body was starting to wind down after demanding so much of it. I got very cold, started shaking uncontrollably in waves, probably hypothermic, and didn’t warm up properly till hours later.

During the second half of the race, I said, I think out loud, “oh no, I’m going to do another one of these”. I half hoped, and definitely expected, I’d feel like last year and want nothing to do with running or ultras for many months to come. This time though, apart from muscle soreness and getting a cold, I felt great post-race and am already thinking about running a new trail this weekend.

I have a bucket list race I would love do to. It’s something I feel I almost have to do. I’ll keep it under wraps for now. It’s still over a year away if I do end up going for it.

Apart from that I’m looking forward to getting back to other activities, more acroyoga, rock climbing, and getting back in the gym.

The following is a cool short video of the event by John Ortiz.

If you’re interested in the history of the race, a book came out in 2017 detailing the story of one of the main people involved in its creation. Historias de un Caminante shares the adventures of Alfonso Cabrera, written by Francisco Pozo Poley. It’s an entertaining read, although only available in Spanish. It’s can be found in many shops and tourism offices around the Sierra de Grazalema and looks like it’s available online here. 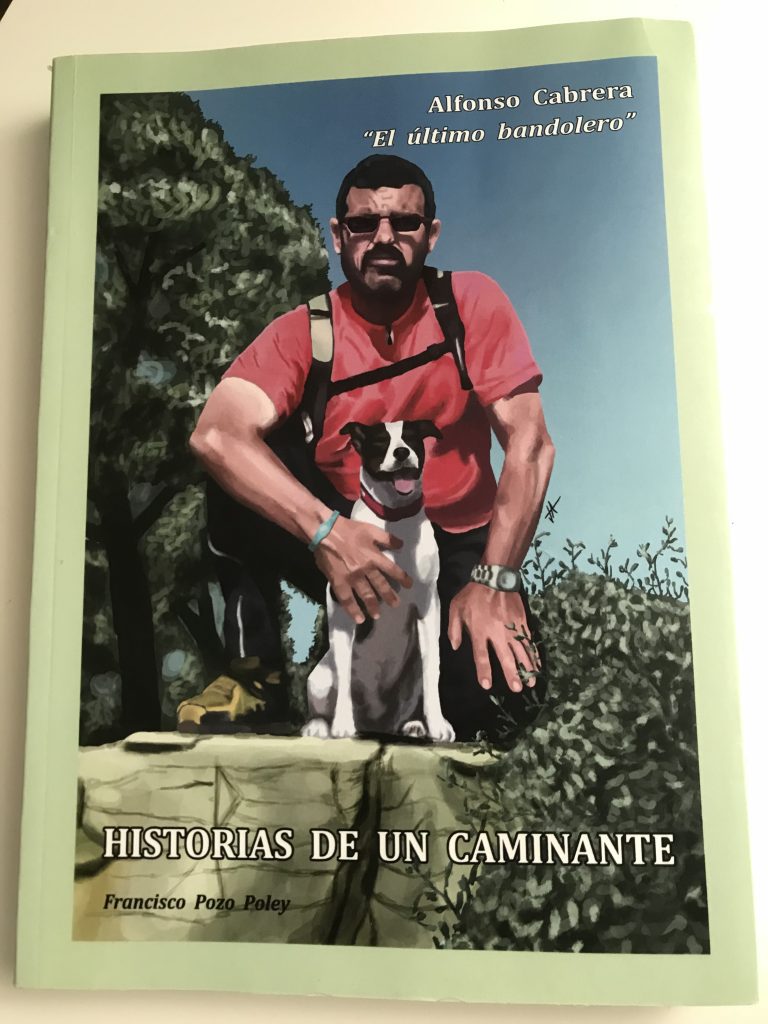