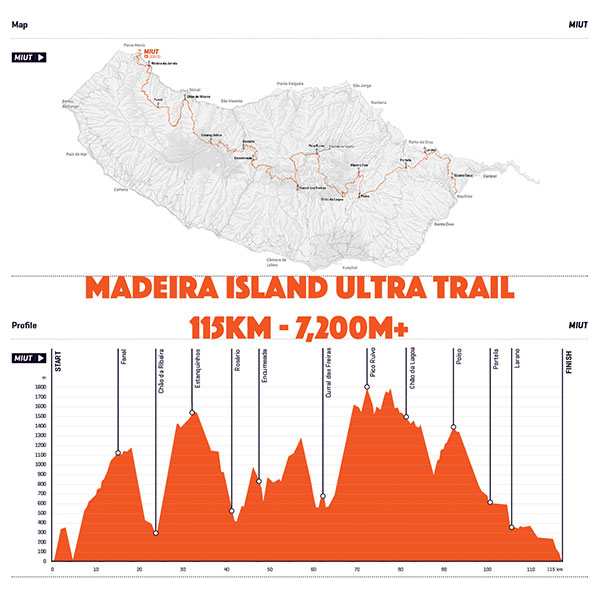 After watching this video, I felt I had to do it. Crossing from one side of the island to the other, traversing incredibly challenging terrain, would be an epic adventure.

As well I training, I spent hours recovering, stretching, foam rolling, planning, doing supporting exercises. Little did I know, as the midnight approached, my race was already doomed.

I tapered for two weeks before the event and felt stronger and healthier than ever. A shin split on my left leg had bothered me for several weeks prior, but miraculously was better on race day.

The 1,000 runners counted down in unison from 10, and we were off. I felt a little nervous, but very excited. The long-awaited day had finally arrived. A few seconds after the horn sounded and I took a small sip from one of my water bottles, mostly to let air out and stop sloshing. My stomach responded with a sharp pain. “That’s not good”, I thought. Maybe it was nerves. Maybe something I ate. Either way, if it was a digestive issue, I could wait a few hours before I really needed to get more calories in, and in that time I was sure my stomach, which is usually rock solid, could digest away the problem.

Hitting the first climb I’d never felt better. This is what I trained for. I was fully prepared to do it, and do it fairly well. I checked my pace, I wasn’t pushing too hard. Breathing was light. And I reminded myself regularly to relax arms, shoulders. I kept an eye on technique and my mantra was to relax and move efficiently. “There’s no hurry. Take it all in and enjoy.”

At the bottom of the first descent in Ribeira da Janela, a crowd was waiting, cheering and ringing bells with hands outstretched waiting for a high five as we ran by. I was having so much fun. Looking back up at that descent, a luminous snake of white and red lights winded its way down the hill.

The second climb was big, we would reach Fanal having climbed 1,600m in just 14km. I settled into a comfortable pace knowing it would be long and steep. Topping out of that climb, the group I was with ran through a eucalyptus forest, the smell was fresh and intense, and combined with the soft sound of quick footsteps on a carpet of leaves and bark it made for one of the most memorable parts of the race for me.

I had planned a quick stop at the first aid station in Fanal. I wanted to top up one water bottle. Weeks earlier, the race organisation sent an email saying the Gold Drink endurance supplement would be available at aid stations, so I bought some and had been using it in my water bottles in training to make sure my stomach would be used to it. One scoop in each 500ml bottle provides 600 calories in total, with electrolytes and salt for hydration. The day before the race however, another email was sent saying we couldn’t fill up our water bottles with Gold Drink, we could only fill our reusable cups, which we were required to carry. I have no idea why that stipulation was made, but it meant most of my nutrition and hydration strategy was out the window. At that first aid station though, a lady took my bottle and asked if I wanted water or isotonic. She filled the isotonic, and minutes later, I thought, “oh, weird. I thought they said they weren’t going to do that”. The isotonic tasted nothing like the Gold Drink I was training with though, and later when I asked was it Gold Drink, a volunteer had no idea what I was talking about. Could be they just didn’t know, but I think another supplement was in those containers. Either way, my stomach problems were created by something unknown before the race and even with perfect race nutrition I don’t think I would have gotten much further than I did.Not knowing I actually would be able to fill my bottles with their isotonic mix, I bought some hydration sachets and a few gels, from the only brand that was available from the little runners market at the race check-in. I hadn’t travelled with my own Gold Drink powder, thinking it would be readily available from all aid stations. That was a huge mistake. Even if the right supplement was used, the concentration would have been different and I wouldn’t have known how many calories I was getting in. I wanted to travel lighter and not carry the powder. Lesson learned. I will always always have my own nutrition and hydration with me and never rely on an aid station. As I’d done at the other two ultra marathons I’ve done.

In any case, in hindsight, I think this complication was just adding insult to injury and the sharp stomach pain I began the race with had already defeated me. The salt sachets tasted weird and seemed to intensify the stomach pain. The gels were disgusting.

The descent after that first big climb was equally big and steep. I caught up with a guy who was going a bit slower than a pace I felt comfortable with and decided to stay with him to intentionally keep myself at a slower, more relaxed pace. There was still a monstrous amount of climbing and descending to do overall.

I hit the second aid station at Chão da Ribeira in 3 hours 4 minutes and started a planned 5 minute stop. I was relaxed. Sat down, shook out my legs as I had practiced. I ate some banana and dark chocolate reluctantly. My stomach was telling me good things were not going to happen if I ate, but I absolutely needed to or I would simply run out of energy.

I started climbing and felt dead. I was in 86th position at the last aid station and would drop about 150 places in this next section. That climb marked a down point which would last 8 hours until I finally quit.

Hours before the sun would come up, I first thought, “oh, I’m just hitting a low point, I’ll bounce back”. At the next aid station I struggled more with food. Now running downhills I couldn’t inhale fully, my belly would hurt as it expanded and each step hurt.

My headspace was also dark, watching my dream being pulled away from me. If I had fallen, or went too hard, or hadn’t trained well, or if the race was just too hard, that would have been one thing. But to have a weird stomach situation I’d never experienced before was torturous.

I tried eating oranges. I tried only drinking plain water forcing a litre into me between aid stations. I peed, but with no stomach improvement. I took more rest at aid stations, but got very cold and was shaking leaving one, having to tuck my hands under the front of my wind breaker, painfully forcing a quicker downhill pace to get warm again. I think I could have easily gone to the medical tent then and there, but took a chance and did manage to warm up.

The sun came up and I had some warm rice at Encumeada. I felt a little better. The sun brought hope. I imagined a longer rest, with my stomach coming around, a surge of energy to complete the race. It didn’t come. I climbed some more, very slowly and painfully, and then could no longer run flat sections. Walking was painful.

My back hurt in a weird way I have never experience before. My knees were sore walking downhills, and my knees are never sore running steep downhills. My body was failing, whether from lack of food, or the effects of whatever was going on in my stomach and digestive tract.

I called Lidiya on route to Curral da Freiras, forcing back tears, and told her I was going to stop. Even to attempt the next massive climb from there to Pico Ruivo seemed well beyond stupid.

Overwhelmed with disappointment and sadness, after 61km and 11 hours at 11am, I waddled into the aid station at Curral and handed over my race number. Patrick O’Hanlon. DNF. Did Not Finish.

Some have said I did well to make it 11 hours, and the intention is only good of course and I really appreciate the support. And of course, if you don’t run ultras, or you’re not prepared for such distances, it seems like a massive distance and time to be moving. But for me, without any self-deprecation, it’s not. 11 hours was not good. I trained to do the race in around 18 hours. A very ambitious time for me. The race time limit is 32 hours. I felt totally prepared physically to do the distance. So it wasn’t like I did my best and was too tired to continue after 11 hours. I did my best for 3 hours, with stomach pain, and then suffered through another 8 hours moving slowly, badly, because of an uncontrolled factor. That said, I really appreciate everyone who reached out and offered support, thank you all so much!

There was little point in struggling through those 8 hours, other than to try and find a solution to that problem in the hope of solving it and finishing the race. I shared the live tracking link with quite a few people, and it wasn’t embarrassment of failing that bothered me, it was being completely honest with myself, knowing I wasn’t quitting because things were a little hard, knowing I’d tried everything possible and that going on was completely pointless.

Most of my mental chatter through the night was about what I could try to fix my situation, and if I was making up excuses to get out of the race. And I kept moving until I had exhausted possible solutions and nullified excuses, and when it felt like continuing could do serious damage to my body. I feel honestly, I could have stopped much earlier.

Uncontrollable shit happens. Many, probably most, ultra runners, even the pros, have races that didn’t go their way.

I came out with no injuries and feeling good, apart from some muscles soreness. I took a little fall with no damage. I didn’t get hypothermia. My stomach pain passed in 24 hours, and I had what felt like liver pain for 2 days. My back soreness went away in a day. Knowing that gave me some perverted comfort, knowing even if I’d waited hours in an aid station, the problems would not have gotten better. I made the right call.

I was able to enjoy the rest of a phenomenal week with my mom, aunt, and Lidiya’s parents in Madeira. I stayed with my sadness and disappointment for a few hours, allowing myself to be present in the space and felt I integrated it. (Here’s a little holiday video from the trip I put together)

At the end of the day, it’s pretty stupid. Ultra marathons are really stupid, but fun (for some). Being upset about something like, self-inflicted suffering, is silly. No one died. No one got hurt. I didn’t finish a race. Big deal.

I need some closure though. I planned on this being my last ultra, but going out that way is very unfulfilling. I still have running fitness and decided to do another race asap. Super fortunately, I’ll be running Ultra Trail Bosques del Sur in Cazorla, Spain on 25th May 2019. A chance at redemption. To show to myself it was just a break stomach issue.

With 102km and 5,000m+ elevation, it’s a little shorter than Madeira, but still very very challenging. I am so grateful for that opportunity and excited for the race!

To close, this video is an awesome 3 minute summary of MIUT this year.

I took part in Ultra Trail Bosques del Sur on 25th May 2019 with a good friend Matt and had a phenomenal experience. We finished together somewhere around 31/32 position overall.